Every strategy at Seeders Capital aims at reducing environmental impacts, improving air quality and increasing sustainable businesses, every tool brings to a rising well-being for cities, companies and people.

Together with that, Seeders’ Media section has a key importance to increase awareness on the environment and to highlight the potential of sustainable assets, that’s the reason why this article is entirely focused on climate change challenges for cities.

According to a recent study by the Zurich Polytechnic and the Euro-Mediterranean Center on Climate Change (CMCC), 77% of cities will be affected by a change in the climate[1]. The research used nineteen climate variables that affect different precipitation conditions and temperatures.

Even if data consider that CO2 emissions will be reduced thanks to the approval of new environmental laws, it is therefore a study with an optimistic outlook[2].

Although climate change is a global phenomenon, it can occur locally with different effects, sometimes in contrast with each other; for example, prolonged periods of drought and sudden and extreme weather events.

There are areas of the planet more exposed to climate change, such as the Mediterranean basin, which recorded a temperature increase of about 1.4 ° C compared to the pre-industrial era, or 0.4 ° C more than the average. world. However, according to the World Risk Report, Central America, Central and West Africa, Southeast Asia and Oceania are the regions of the world with the highest level of environmental risk.

In general, coastal areas are more exposed to the consequences of rising ocean levels and increasing violence from hurricanes, and more than 90% of the world’s urban areas are located near seas and oceans. About 55% of the world population now lives in urban areas and this percentage is expected to rise to 70% by 2050[3], due to strong urbanization phenomena, especially in Africa and Asia. Large concentrations of population gathered in highly impermeable areas (buildings and roads), with a reduced percentage of vegetation – often near coastal areas – therefore represent a situation of extreme vulnerability to climate change.

The main risks for cities include: prolonged periods of drought alternating with periods of heavy rain, capable of generating floods and malfunctioning of sewage systems, intense heat waves capable of causing serious health problems to the weakest sections of the population, alternating to sudden particularly severe winters, continuous worsening of air quality including prolonged pollen seasons with increased prevalence and incidence of allergies.

As pointed out by the C40 association, the economic effects of climate change in cities can be just as devastating as the physical ones. Unexpected expenses from storms, floods, snow removal and prolonged droughts can lead to significant business and service disruptions, as well as jeopardizing municipal budgets.

However, cities have tools to prevent and counter the effects of climate change. First of all, urban density must be seen and encouraged as a strength, limiting the use of land for further expansions of cities in the territory, while promoting the use of horizontal surfaces more permeable to water, such as green roofs and mantles, permeable roads. 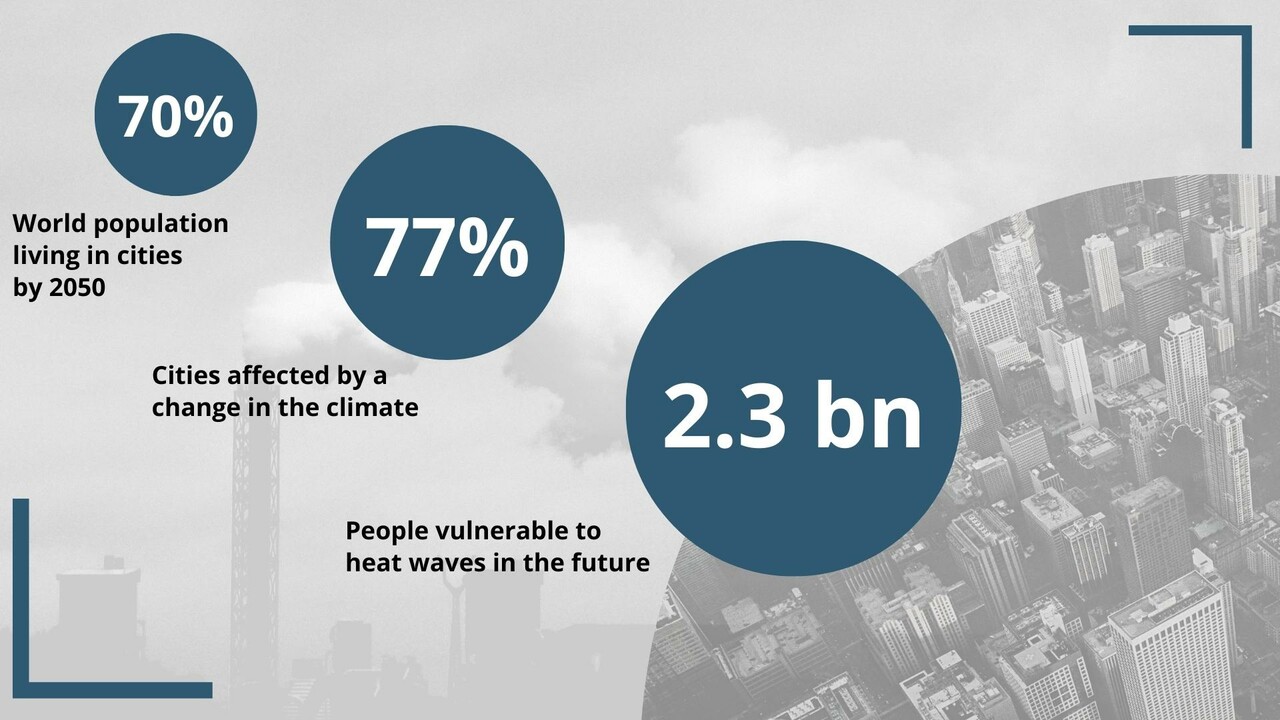 The “heat island” effect in cities

Such heat waves are defined as a period of unusually warm weather that typically lasts two or more days with temperatures that are above historical averages for a given area. In addition, cities are increasingly overheated as they are characterized by the “heat island” effect (urban heat island, UHI). The UHI phenomenon is substantially caused by the anthropogenic alteration of the natural environment, such as the development of buildings and waterproof surfaces, which determine a greater heat capacity that traps more energy and radiation with a consequent increase in temperature. The combined effect of the two phenomena could lead an average city to warm up to plus 4 ° C by 2100. Even with a 1.5 ° C warming, there could be 2.3 billion people vulnerable to severe heat waves[4]. This will concern even more big cities of the poorest countries. Consequently, this situation cannot but translate into an increase in the demand for energy for the cooling systems of the rooms.

To avoid heat islands and heat waves is necessary to use materials with high levels of reflection to solar radiation, both in public spaces and on the surfaces of private buildings, that’s why at Seeders Capital we take care both of businesses and municipalities sustainable practices, developing circular and efficient strategies to avoid climate consequences, together with ESG Consultancy we provide Clean Air Zones, Zero Waste Zones and Clean Energy Zones to maximize environmental awareness, productivity and well-being.

The use of technologies that promote the exploitation of renewable energy sources must also be encouraged, but above all the energy performance of the buildings in which we live and work must be improved, by acting on the building envelope and replacing heat generators with low performance and high emissions. of pollutants. In order to reduce the environmental impact, improving the living conditions of citizens, pedestrian areas and paths must be promoted and enlarged, the use of bicycles and cycle paths, public transport, light and shared vehicles (scooters and car sharing), and finally technologies with reduced local emissions.